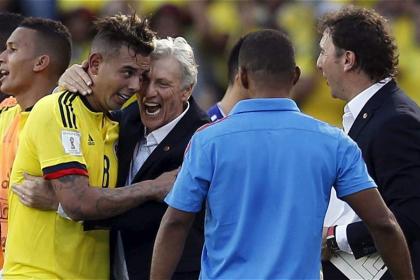 Edwin Cardona was one of the good players of the Colombian National Team that José Pékerman did not make the most of during his time as coach of the Tricolor.

That is perhaps one of the most repetitive criticisms of the Argentine coach who made history in Colombia for leading the team that participated in the last two soccer World Cups.

Although there is not much knowledge of the relationship between the player and the coach, in the La Disidencia Fútbol program, Lucas Jaramillo, representative of Edwin Cardona, was present.

Although the main theme was not the Antioqueño who plays in Mexico, the former soccer player and now businessman told of the influence that the coach of the Colombian National Team can have in the decisions a player makes, as it was with Cardona.

“Does the coach of the Colombia National Team mess with the player to tell him not to go there because I have to get you off the radar”, asked Sebastián Botero, who is part of the program and was a professional footballer and now a coach in the lower ranks of the DIM .

To the question, Jaramillo replied: “Yes, the truth, the truth, Pékerman told Edwin”. “What?”, They countered. “Stay in Boca and he didn’t take it either,” concluded Lucas Jaramillo.

Edwin Cardona was left out of the 2018 World Cup in Russia and although the true reasons for that decision have never been known, Cardona is one of the players that many fans asked for the good time he was going through in Boca Juniors at that time.