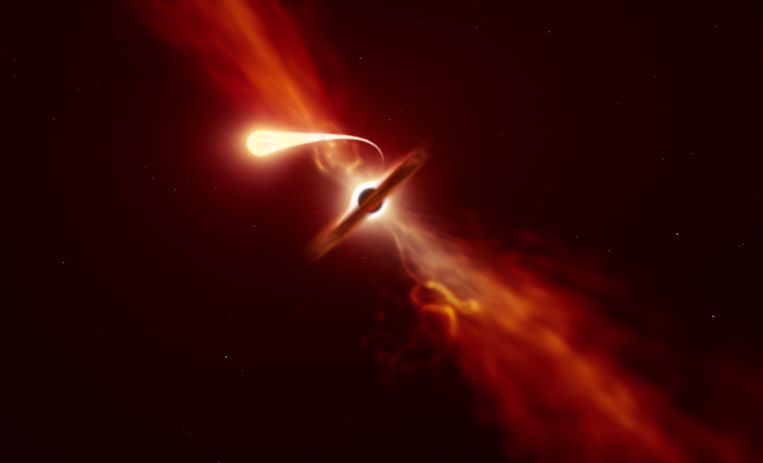 The culprit? A black hole, an object so heavy that nothing can escape its gravity, not even light. An international team of astronomers writes this in the journal on Monday Monthly Notices of the Royal Astronomical Society.

When such a black hole gets something in its proverbial clutches – be it a star, planet or a human – the result is special. When you are with your feet down a black hole, the hole pulls just a little harder on your feet than your head. The uncomfortable consequence is that you turn into an elongated string, after which the hole patiently slurps you in. Astronomers also refer to this process as ‘spaghettiification’.

It is precisely that tragic fate that struck the star – roughly as massive as the sun – some 215 million years ago. That’s how long it took for the light from the flash to travel from the distant galaxy to our Earth telescopes. After that first flash, the star slowly but surely lost all of its material, like a licorice lace being unwound.

The measured flash comes from the first piece of ‘spaghetti string’ that fell into the black hole, a violent event with a lot of radiation. It is the closest flash that astronomers have seen so far.

Such flashes are normally difficult to see. The light is often muffled by a layer of dust and gas released during the spaghetti slurping – black holes are messy eaters. Since the astronomers saw the flash this time before the dust curtain was lowered, they were able to capture the entire process in much more detail.

Around the world, astronomers focused their most powerful research telescopes on the event. During a period of half a year they saw how the light came from the cosmic dinner of the black hole first increased in brightness and then died out. At the time, the hole slurped in roughly half of the star’s mass.

The detailed measurements should provide more insight into the extreme conditions around these types of supermassive black holes, which are at the center of most galaxies. This is also the case in the Milky Way, the galaxy in which the earth and sun live. That is important because black holes are so extreme that our understanding of reality is crumbling within them.

Anyone who learns more about the behavior of black holes will therefore gain more insight into it how the basic fabric of the cosmos is put together. Partly for this reason, the pioneers who described black holes mathematically and discovered the supermassive one in the Milky Way won last week a Nobel Prize, the highest honor in the exact sciences.

The Chief Rabbi of Poland to the Primate: I am deeply concerned

Attack in Nice. How to better detect terrorist attacks?

Perpetrator of knife attack in Nice was 21-year-old Tunisian