Another monster is “sleeping” under Alaska. Scientists have discovered a new supervolcano 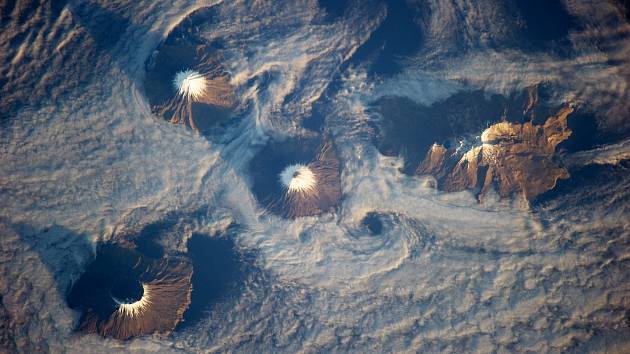 So far, scientists on the islands have known several separate volcanoes. However, the latest research they presented at the meeting of the American Geophysical Union at the end of last year suggests that these volcanoes are interconnected into something larger. The dreaded supervolcano, whose possible explosion could have worldwide consequences.

As the server states Science News, the current study claims that a giant crater, which formed during the explosion of a supervolcano and which suggests its existence, connects at least four already known volcanoes. “The as yet unconfirmed discovery was made on the basis of several pieces of evidence, which, however, are not interconnected at first glance,” said Diana Romanová, a member of the research team.

Antarctica hides a cosmic treasure, 430,000 years ago there was a giant explosion

However, by combining many seemingly unrelated fragments, scientists have concluded that a supervolcano is dormant beneath the surface of Alaska. This is a groundbreaking discovery. “Its potential identification will help us understand what we can expect,” said John Power, the team’s research leader. He said the explosion of a supervolcano could destroy world civilizations.

A team of experts found that the threat in the form of the most dangerous of the volcanoes probably lurks under the Islands of the Four Mountains. The name, as cut from Tolkien’s novels, actually refers to the six volcanic islands of Carlisle, Cleveland, Herbert, Kagamil, Tana and Uliag. At first, they look like a mere cluster of volcanoes. However, according to the Science News website, the scientist was fascinated by a giant crater, which suggests that the noise below the surface is connected in a supervolcano. The crater strikingly resembles a caldera of enormous dimensions. That is, a formation that forms after an eruption, during which the central part of the volcano collapses and falls.

Mount Cleveland is one of the most active volcanoes in the area. “We were not surprised that there were micro-earthquakes in the area. However, it spread further east and north than would be usual if their origin was only volcanoes visible on the surface, “said Romanová.

This finding supported the caldera theory, as Mount Cleveland’s activities fit exactly into the scenario, according to which volcanoes still remain active at the edge of giant supervolcano craters. “Since 2001, we have seen sixty to seventy eruptions,” he told Science News Power.

Scientists now have a long way to go. However, this is complicated by conditions in the Aleutians, the tip of Alaska. In the field, scientists can only research for a certain part of the year.

Heir to the Yellowstone supervolcano

If scientists’ theories are confirmed, they have discovered a new supervolcano in the Aleutians, the world‘s most dangerous volcano. However, it is not the first, there are several such volcanoes in the world.

Probably the best known is Yellowstone. The name that most people associate with the well-known American national park actually belongs to the supervolcano on which the park is located. If Yellowstone ever exploded, it would be a disaster for America. And not just for her, the consequences of such an eruption would be felt by the whole world. The USGS said the pyroclastic current from the eruption would completely flood the states closest to the national park and the rest of the United States would be covered by volcanic ash. The United States could become modern-day Pompeii.

Israeli Cave of Horrors: A mysterious place has revealed another surprising secret

The eruption of Yellowstone would have far-reaching consequences for the rest of the world. The climate on the planet would change significantly, which would mean the extinction of many species of animals and plants. The eruption of Yellowstone last took place 640,000 years ago, leaving a giant caldera, similar to what scientists have now discovered in the Aleutians. Although there is no immediate threat of an Yellowstone eruption, according to USGS experts, they are still experiencing lively volcanic activity in the area.

America also hides other supervolcanoes, whose explosions hundreds of thousands or millions of years ago caused catastrophes on earth, as we now know perhaps only from sci-fi movies. Twenty-eight million years ago, a supervolcano erupted The Caldera Garita, located in the territory of today’s US state of Colorado. And it was one of the strongest eruptions in Earth’s history. It was this supervolcano that was behind the massive extinctions in the Tertiary.

Travel faster than light is possible, says the scientist. He offered a solution

Seventy-four thousand years ago, then the eruption of a supervolcano Toba on the Indonesian island of Sumatra, it brought humanity to the brink of extinction. According to the Britannica encyclopedia, the supervolcano spewed out about 2,800 cubic kilometers of lava and dust. By comparison, when Mount Vesuvius destroyed Pompeii, it spewed about nine cubic kilometers, and the Eyjafjallajökull volcano in Iceland ten years ago had only half a cubic kilometer of such material.

The climate on Earth has changed dramatically and there has been a massive extinction of plants and animals. To date, according to scientists, no super volcano eruption has surpassed Toby’s explosion. The place where the supervolcano erupted now resembles a volcanic lake of the same name.

Four million years ago, one of the most destructive supervolcano eruptions in the world in South America took place. Specifically, a super-volcano erupted in the north of present-day Chile Pacana caldera. The extent of the eruption was basically similar to that of the Toba supervolcano, but it affected a geographically different area.

One and a half million years later, South America was again affected by a giant supervolcano blast. This time he was taken care of by a supervolcano Galan Hill, located in the Argentine province of Catamarca. It was already a weaker explosion than his Chilean counterpart, but even so, the consequences were still great not only for South America.

Scientists have discovered the origin of the mysterious object of Oumuamu. It’s not an alien ship

As for the supervolcanoes, in Oceania, scientists have discovered them in the New Zealand region of Taupo. Explosions of local supervolcanoes Protect Taupo took care of the disaster not only in the ocean region, but also in parts of Asia. Taupa exploded more than twenty-six thousand years ago and was the last similar explosion in the area. However, the eruption apparently extended the ice age by another ten thousand years.

Supervolcans can also be found in Europe. The supervolcano is closest to the Czech Republic Campi Flegrei. It is located near Naples, Italy. According to Nature magazine, it last erupted twenty-nine thousand years ago and covered the entire region with volcanic dust.

A few years ago, scientists also included the Central Siberian Plateau among the supervolcanoes. According to their findings, the explosion of the local supervolcano destroyed the ozone layer of the planet. According to the latest scientific knowledge, the eruption of the volcano in the area of ​​today’s Siberian traps lasted a whole million years, practically destroying the planet’s ozone layer and exterminating 96 percent of all organisms in the seas and about 70 percent of terrestrial animals.

A total of twenty supervolcanoes or their explosions were recorded in the world, some of which took place repeatedly in the same areas.

Supervolcanoes in the world