Activists protest against feminicides in Mexico 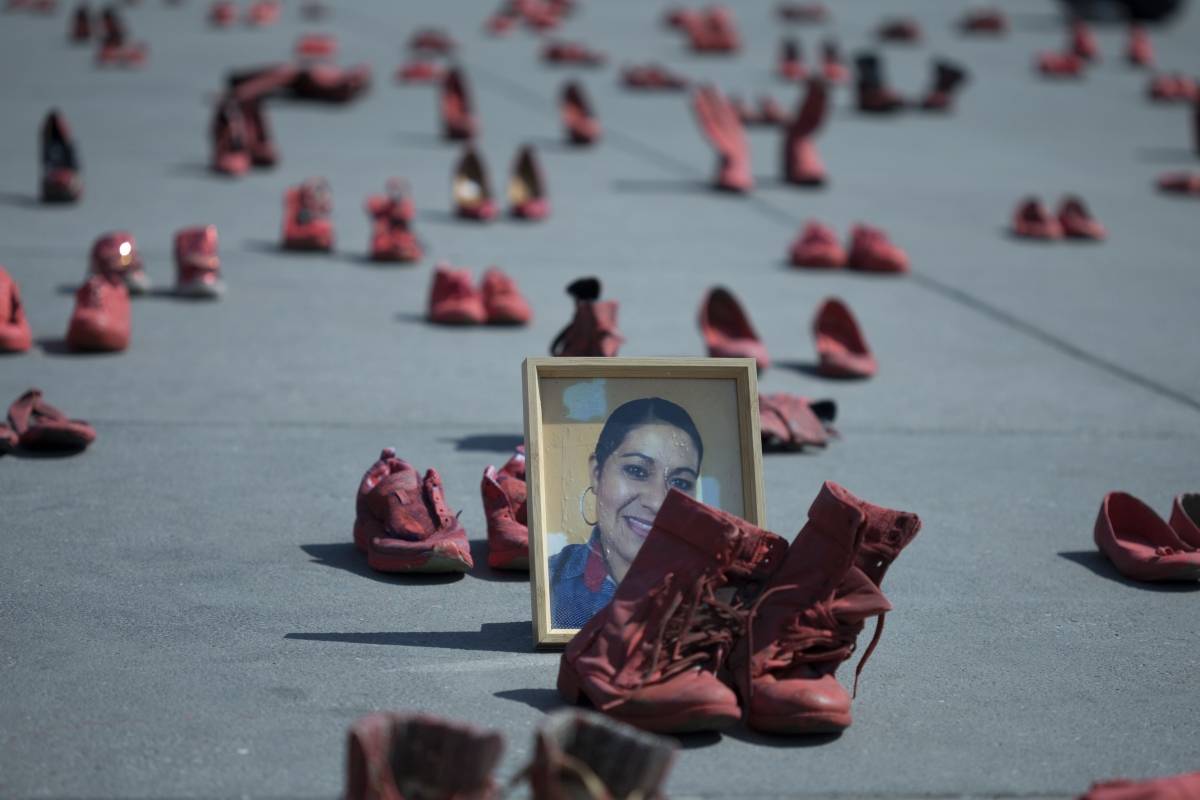 Activists on Saturday placed hundreds of pairs of women’s shoes painted red in Mexico City’s main square to call attention to gender-based violence in a country, where an average of 10 older and younger women are killed daily and where less than 10% of cases are resolved.

Before the inhabitants and tourists who passed through the Plaza del Zocalo – the historical, political, cultural and religious heart of the country – the protesters marched towards the huge front door of the National Palace, which dates from the colonial era, and placed five pairs on the cobbles before the gaze of uniformed guards.

“Not one more murdered,” shouted the participants to the beat of a drum.

“The shoes represent the absence, making visible the absence,” said artist Elina Chauvet, 60, who first performed this type of protest-performance in 2009 after her sister was murdered by her husband in a case of family violence in Ciudad Juárez, border with the United States. “And the red is for spilled blood but it is also a piece that speaks of love.”

Saturday’s protest was the most recent in various mobilizations in recent months for violence against women. The actions have included angry demonstrations against the violations in which the participants have thrown diamond and painted monuments; protests of thousands of them singing the feminist anthem “A rapist in your path”, a viral phenomenon in the world and the American continent; simple gears and collective fabric seedlings.

The common denominator: the inability of the authorities to solve the problem of gender violence in one of the most dangerous countries in the world for women.

President Andrés Manuel López Obrador, in office for a little over 13 months, and allied officials have pledged to make the fight against femicide and other gender crimes a priority. In November, the governor of Mexico City, Claudia Sheinbaum, declared a warning of gender violence in the capital and already add 20 states that have done so in the country. Sheinbaum said the measure will raise awareness of the problem and result in better results.

However, the participants of the protest on Saturday consider that the results go from little to nothing. There were 3,662 feminicides or murders of women for gender-based violence in 2018, before López Obrador assumed the presidency, and the rate maintains its accelerated pace in 2020 although there are no definitive figures for 2019.

“Unlike. They keep killing us, ”said Elizabeth Machuca Campos, a 39-year-old craftswoman and women’s rights activist. Machuca is from Ocoyoacac, in the State of Mexico, where her sister was murdered in 2017.

He said that a person was arrested and sentenced, but at the last moment the accusation was changed from feminicide to homicide, a practice that activists and groups like Amnesty International affirm is frequent among Mexican authorities at various levels to make up the statistics on gender violence .

Machuca brought a picture of her sister and the shoes she used when they found her body to the Zocalo.

“Those pairs of shoes need their owner, who are the women who have torn us away,” Machuca said through tears.

The new attorney general of Mexico City, Ernestina Godoy Ramos, acknowledged on Friday that she faces a “huge” challenge in terms of public safety for the capital and pledged to do justice in cases of femicide.

“That is heard very loudly and heard far away: there will be no impunity on the issue of femicide,” said Olga Sánchez Cordero, Secretary of Interior (Interior) of President López Obrador on the same day.

Violence against women is a problem that creeps in from previous governments. In the 1990s and early 2000s, Ciudad Juárez became sadly famous for the murders and disappearances of hundreds of adult and adolescent women, in cases that characterized impunity. The activists currently point to the State of Mexico, the most populous in the country, as one of the serious sources of femicide.

Sacrisanta Mosso Rendón was wearing a T-shirt with the names and photographs of her daughter Karen, 17, and her son Erik, 12. Karen was raped and killed at her home in Ecatepec, State of Mexico, in 2016, and Erik was strangled when the events happened, he said.

Mosso, who heads the activist group Voces de la Absencia, said the murderer was captured and sentenced to only five years. Mosso demanded more severe sentences for the few cases of femicide resolved. This minimum figure shows a pattern of almost total impunity in crimes of this type in Mexico.

“Unfortunately, women are not safe anywhere,” he said. “Governments arrive, governments leave and we continue in them because we don’t move forward.”

However, Chauvet said that although concrete results are scarce to date, this protest and others have turned what was once a taboo subject into a matter of national public interest.

“Although it seems that apparently it does not immediately achieve a change, I think it does, that is, it is eventually achieved,” he said.