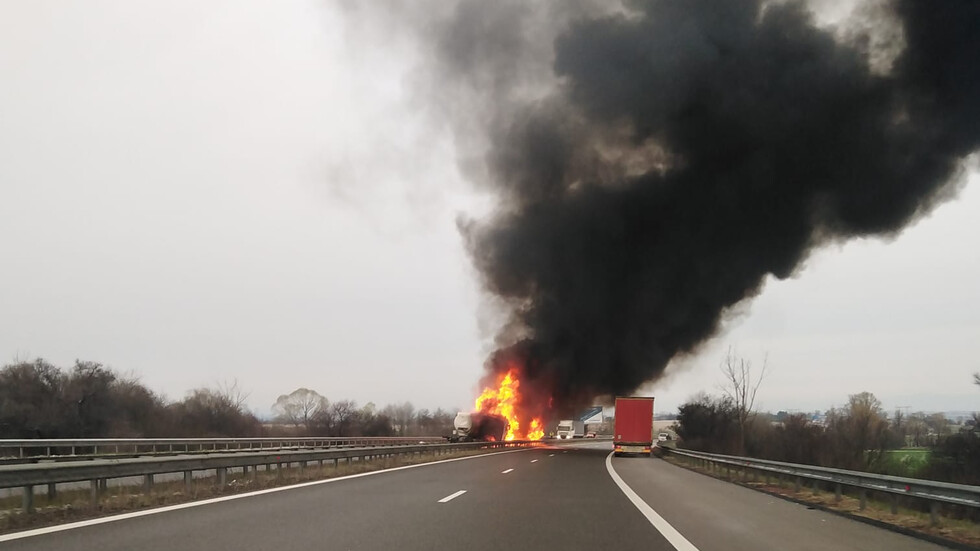 A severe accident closed the Trakia highway today. A tanker crashed into a truck and this led to a huge fire. The accident happened this morning 6 km from the highway in the direction of Burgas.

The driver of the tanker was killed, the Emergency Service told NOVA. He is a Bulgarian citizen. The other participant in the accident is from Serbia.

Firefighters spent hours trying to contain the blaze after tons of fuel caught fire on the road.

The traffic in the direction of Burgas has been closed for 12 hours. And on the route in both directions there is serious damage.

At around 7:30 this morning, for unknown reasons, a fuel tanker hit a truck. After the impact, a fuel leak begins, which ignites.

“The driver of the tanker has died,” said Commissioner Martin Tsurenski, head of the Traffic Police at the Interior Ministry.

“The other driver, I don’t think there are any serious injuries,” added Ivo Iliev, Sofia’s deputy city prosecutor.

The reasons for what happened are yet to be clarified. The inspections of the police and the prosecutor’s office lasted for hours.

“They were moving in a column. The tanker hit the truck moving in front of it. It is possible, for example, that the driver is sick, asleep. And it is possible that he was spotted by another car “, Ivo Iliev commented.

The fire was so strong that the tank burned for more than 4 hours. There is almost nothing left of it.

The road surface of the highway was also damaged by the fire.

Repairs of the Trakia highway begin after the burning tank

“If there is damage to the road surface, it is due to the high temperature that has formed during the burning,” explained Commissioner Martin Tsurenski.

Due to the huge amount of gasoline that burned in the accident, a mobile station came to the scene to check for contamination. Deviations from the norms were not reported.

However, the incident caused serious traffic jams on the bypass routes.

The traffic on the road to Sofia has already been restored, and the one to Plovdiv will be released when the procedural-investigative actions and the inspection of the scene are completed. Smoking is also controlled.

Viewers of NOVA sent videos from the scene of the incident in our column “My news“, which shows that thick black smoke floats over the highway. A column of cars has formed, waiting on the spot.

We are also waiting for your signals in our “My News” section. HERE.