Abidjan floods: helplessness and anger the next day 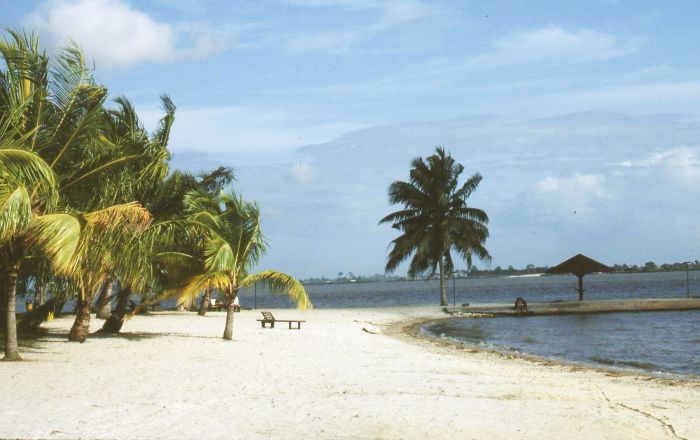 In Cocody, the commune of Abidjan most affected by the floods of June 25 which left seven dead according to an official report, the population still in shock is working to resume their daily life as the weather forecast for days to come all also rainy.

Abidjan did not escape the unmissable event with the rainy season, with its share of deaths and material damage. The economic capital of Côte d’Ivoire was hit hard on June 25 by furious and sudden floods that paralyzed several neighborhoods.

In Cocody, a posh commune in the east of Abidjan where certain districts, after the deadly fury of the water, now resemble battlefields, the time has come for cleaning up and taking stock of the losses.

Images of the Riviera Palmeraie, June 26

The rain which continues to fall, with certainly less heat than the day before, threatens to replace the water which has largely withdrawn from the streets and houses which had been literally “invaded” the day before.

A street that has become impassable

In some streets, the inconvenience of the floods added a layer to the traffic jams, usually monsters, requiring the remarkable presence of the police. Others, currently impracticable, are deserted.

Constables ensuring traffic at an intersection at the Riviera Palmeraie

For Philippe N’Doua, 30, a teacher who lives in the Riviera Palmeraie – Cocody district regularly flooded during the rainy season – this year’s floods have “a particularly bitter taste”. And for good reason, in 2019, a less harsh episode had spared Abidjan overall.

“We really thought the nightmare behind us, at least, we hoped above all that the authorities assured us that the sanitation and drainage works undertaken in the past two years in the area were going to significantly improve things. But with this rainy season, it seems that not much has changed. It’s really revolting and we don’t know what to think anymore, ”he says, disillusioned.

Like other residents of his neighborhood, Philippe had the “bad surprise” to find, after returning from work, his apartment located on the ground floor of a residence, invaded by water and mud. “When I arrived, the water had already removed a lot but not without having wetted everything on the floor and took care to take what was at the entrance of the house, including my shoes », He confides to Sputnik, his smile frozen.

Sodexam, the state-owned company in charge of national meteorology announced for June 26 rains possibly as heavy as the day before. What crystallize the concerns of many Abidjanis. Finally, the heavens decided to be more lenient.

Worry, yes, but it is mainly anger and helplessness which seem to be the feelings best shared by all because, once more, torrential rains have claimed victims and caused significant damage.

Indeed, the National Office of Civil Protection (ONPC) – submerged in calls for help on June 25 – announces seven dead. A drama that inevitably comes echo the landslide which, only a week before, had claimed the lives of 17 people in Anyama (northern suburb of Abidjan).

Kadi, 19, a fruit seller a hundred meters from the roundabout of the Riviera Palmeraie, too, narrowly escaped drowning, surprised by the sudden rise but above all the strength of the waters.

“It was raining hard enough but I thought I was safe where I had taken refuge. Then I quickly realized that the water was rising very quickly but with panic and the current which was getting stronger and stronger, I was afraid to move. After a while, I lost my balance and the current immediately led me to a large gutter not far away, ”she tells Sputnik.

Kadi owes his salvation to two reckless taxi drivers who did not hesitate, before the cries of distress of the young girl who managed to hold on to an iron bar in extremis, to defy the current as best they could rescue him.

Whose fault is it for all these dramas?

The municipality of Cocody is not the one that ordinarily records the highest rainfall, but it is, year after year, generally the most damaged. And there is an explanation.

According to Hermann Zouzou, industrial safety and environment engineer interviewed by Sputnik, the districts of this municipality regularly flooded are located on a slope which is directly connected to the lagoon and the sea, and which receives excess water from the areas located on trays like Abobo.

Abobo is one of the largest municipalities in Abidjan, and often has the highest rainfall during the rainy season (which generally lasts from May to August). Here, rain can fall continuously for many hours and on several days in a row.

“The areas located on plateaus have natural and agricultural areas that allow water to be retained by the soil. But, at Cocody level, there are fewer natural areas. The whole area is waterproofed, the natural soil does not have a large area to absorb as much water as it can. From then on, the water from the plateaus continues freely. The pipes at Cocody being undersized because, when the plans were being made, we did not expect such amounts of rain, they struggle very quickly to make the weight. Worse, these pipes are often obstructed by all kinds of household waste, “said the engineer.

For Hermann Zouzou, solving the flooding problem in Abidjan is “a huge undertaking” which involves many technical aspects which are the responsibility of the authorities, but also the fight against real estate and sanitary incivism populations.

Until then, the weather forecasts moderate or heavy rain for the next few days, with the rainy season still in full swing in July.

Read Also:  Major evacuation in Kongsvinger due to gas smell