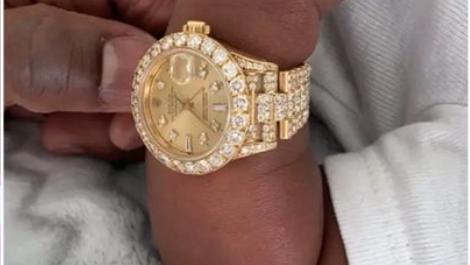 For many athletes it seems to be the trend to give the youngsters the most expensive gifts possible. Boxer Amir Khan gives his son a Rolex worth 30,000 euros for his first birthday – and is not alone: ​​Boxing star Floyd Mayweather also likes to give away one or the other diamond-studded watch, and footballer Neymar is also nothing too expensive, when it comes to his son.

You can never start too early with luxury watches – can you ?!

It’s a bit strange: What can a one-year-old baby do with a Rolex? But in the luxury world of boxer Amir Khan, an expensive watch collection is part of it and as the saying goes: practice early! In addition to the luxury watch, there was also a safari cake and lots of “normal” toys from proud dad.

The sooner the better, that’s probably what Floyd Mayweather thought when he gave his grandson a Rolex when he was only five weeks old. Mayweather is known for sharing his swanky lifestyle with his fans on social media. But to give an almost newborn a watch worth 32,000 euros with additional diamonds is one more thing.

The sum shouldn’t be difficult for Mayweather to cope with. The athlete now has an estimated fortune of 400 million euros.

Neymar buys his son a horse

In contrast to the two boxers, footballer Neymar looks almost down to earth. His 9-year-old son David Lucca received his own horse as a gift. And, of course, a great party. Neymar loves his son and would grant his every wish. The same applies here: money does not play a role.