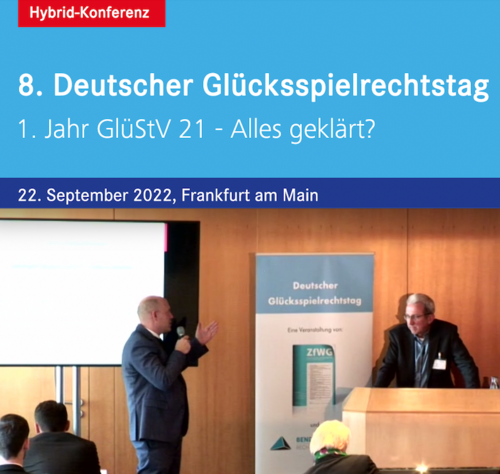 The successful format “German Gambling Law Day” took place today in its eighth edition in Frankfurt am Main. More than 100 participants, including our industry’s concentrated legal expertise, pursued the interesting question at the hybrid meeting: 1st year of GlüStV 21 – all cleared up? The responses were not uniform but consistently exciting and in some cases optimistic. Because law as a unit of order and localization – according to the former dictum of the legal philosopher Carl Schmitt – should not be canceled as an objective even from our (sad!) Industry.

Pragmatists instead of academic lawyers

Professor Dr Walther Michl of the Federal Armed Forces University of Munich began with the “Determinants of the German gambling market under European law”. The European legal framework is de facto meaningless due to the legal structure of gambling in Germany. There are no secondary legal rules, only recourse to primary rights and relevant fundamental freedoms such as the free movement of goods, the freedom of establishment and the freedom to provide services. Touching the cases of Stanley International Betting and Sporting Odds Limited was enlightening and interesting even for “dogmatic connoisseurs”.

Professor Dr Michael Kubiciel, of the University of Augusta, was invited to speak on “Cross-border gambling, national criminal law”. Admittedly, the gambling offer raises numerous cross-border criminal law issues. “Regulatory issues are as complex as the dynamic market. Just as the sea knows no borders, digital gambling does not stop at political borders ”. Easy to understand. Heavier tariff: “In terms of substantive law, the multilevel dimensionality affects the application of criminal law”. Kubiciel is certain: “In my opinion, the amendment to the State Gambling Treaty confirms the position that a total ban on online casinos was not necessary. Player protection can be achieved in a more targeted, effective and proportionate way. through regulatory requirements “.

“Experiences in gambling regulation from an Austrian point of view” highlighted Mag. Gustav Trefil. The legal clerk of the gambling department of the Federal Ministry of Finance in Vienna recalled for the first time how Empress Maria Theresa, from 1751 onwards, wanted to control the people’s passion for gambling with a patent. Successive emperors followed suit. In 1933, gambling was divided into lotteries and casinos. Incidentally, unlike in Germany, sports betting does not count as gambling in “Felix Austria”. This also differs positively from Germany: in Austria, gambling issues are federal and not state. A wild patchwork quilt like in Germany is unimaginable there. What is surprising, on the other hand, is the expected shift in the neighboring country from a whitelist to a blacklist.

Benjamin Schwanke Announcement: We’ll Get Them All!

Also on site at the 8th Day of the Gaming Law: Benjamin Schwanke, president of the Joint Gaming Authority of the Federal States (GGL). He began his report with the cheery observation that Germany has more than 150 years of regulatory experience than Austria since the class lottery was founded in Hamburg around 1600. With the necessary seriousness, he then described the development work in GGL from 1 July 2021. Department III (currently eleven employees, later 28 employees) is of particular importance in the fight against illegal gambling. The first IP blocking procedures have already started and are working closely with the Halle an der Saale Public Prosecutor’s Office and the tax authorities.

“Our claim is that we catch them all, sooner or later”, is the optimistic declaration of war on illegal gambling by the head of authority. The anonymous whistleblower system at www.gluecksspiel-behoerde.de is already up and running. From 2023 further tasks will be transferred to GGL, including market observation, authorization procedures and valuation. “We will therefore be the central point of contact for all those involved in the gaming market.”

Transfer to Professor Dr. Jens M. Schmittmann of the FOM University of Economics and Management in Essen. His theme: “Gambling and Insolvency: Repayment Obligations and Restructuring Options”. An option that we hope our readers will never have to come up with. In addition to important factual information, the Ruhrpottler has not lost the humor. Professor Schmittmann teased modern bureaucratic terminology – a nice splash of color in the lecture.

with Dr. Tobias Hayer of the University of Bremen, scientist, psychologist and declared consumer advocate, also took part in the information event. Topic: “Gaming on Switch, YouTube and Co .: What are the dangers associated with this trend?” The first contact with gambling is increasingly taking place on the Internet, warns Dr. hay The protection of minors is completely absent. On the contrary, unrealistic profit expectations would be awakened. Successful star influencers like MontanaBlack and Jens “Knossi” Knossalla with high reach would convey a “strange gambling image”, partly with a link to online casinos. Positive the change of heart on Twitch. From 18 October 2022, the service channels will no longer be able to broadcast broadcasts from websites with virtual slot machines, roulette or dice games, if consumer protection is not guaranteed.

Chrysanthi Gatidou, OktoPay, spoke on “Digitization in the gaming sector: how digital payments allow you to create an effective safety net and offer opportunities for the protection of players and the prevention of money laundering”. With OktoPay, all regulatory requirements are met and player protection is actively supported with high security standards, according to the company representative. The internationally established product also allows you to top up your players’ accounts online. Self-blocking is possible and the user can also check the net result of their game.

The argument of Professor Dr. Bernd J. Hartmann, University of Osnabrück: “Minimum distances between arcades”. The minimum distances are disproportionate and unconstitutional! This is Professor Dr. Hartman’s clear message. Because only qualitative regulation – practiced in some federal states such as Hesse or Saxony-Anhalt – can contribute to the protection of players. The lawyer also knows that land-based and virtual slot machines have become largely interchangeable, and there is talk of the substitution effect. The player also has access to online gambling at any time. In addition, the blocking system and mandatory admission control would ensure effective player protection in the legal arcades. Jurisprudence must now take the new situation into account.

Petra Guttenberger: In Bavaria we lead decisive and clear actions

The Bavarian state parliament deputy and lawyer Petra Guttenberger had supported the cause of “player protection against illegal gambling”. When the State Gambling Treaty was passed, she experienced many bizarre situations, but then the treaty, which was overall positive, developed its own dynamic, according to the CSU political optimist. “In the course of the evaluation, we will see what we have achieved,” says Ms Guttenberger, whose contribution revealed great expertise. Quantitative restrictions are a mistake, said Fürtherin, who never tired of pointing out that arcades should be supported with quality concepts. Furthermore, online gambling markets with their great dynamism are difficult to contain.

Are loot boxes really illegal gambling? Not for the politician, because you buy the chances of winning. Media proficiency is the magic word for preventing overuse behavior in the first place. And on the subject of fun games, Petra Guttenberger says: “In Bavaria we conduct strong and clear campaigns. We do not accept legal violations. People should be at home in the legal game. If the game moves to the back room, we have a problem. “

Volker Nottelmann: The opposite is true

Almost on the eve of Gambling Act Day, Volker Nottelmann, General Counsel of Gauselmann AG, spoke about “The further development of gambling hall regulation after the ruling of the Federal Constitutional Court (regulation without borders?)” . In a sense, East Westphalia followed Professor Hartmann and questioned court decisions that have fallen behind the long-changed reality. Because it is claimed that we still have largely unregulated arcades since the mid-1980s. However, the opposite is true, as Volker Nottelmann explained fully and precisely. OASIS connection, trained staff, introduction of the player card, further reduction of bets and chances of winning, ban on advertising, etc. Instead of acknowledging this, countries like Bremen would do even better when it comes to strangling and bullying entrepreneurs. “This astounded me. Anything qualitative is ignored,” says the legal counsel of Gauselmann AG, who expects a breath of fresh air in jurisprudence.

Finally, the exciting lecture by Karsten Königstein of the law firm Benesch & Partner: “Seamless in the jurisprudence? The development of the jurisprudence on the turning point of Baden-Württemberg in the area of ​​arcades. “The challenging excursion led the public into the depths and banks of administrative law in Baden-Württemberg. Loss of seamless business continuity, shaky facts of exemption, entanglement in the history of the permit, change in dogmatic argumentation, breaks in the jurisprudence on caesura, dubious tolerance on acclamation, just to name a few key words.

The lawyer Mirko Benesch added, among other things, that the constitutional complaints he presented are pending, with an oral hearing next November. At the same time, the invitation to the 9th German Gambling Law Day was issued today. Please take note of the date: Friday 15th September 2023.