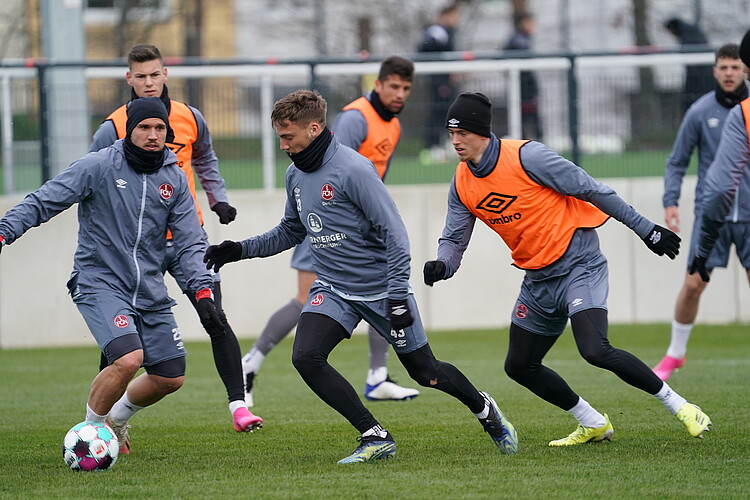 Today we started preparing for our next away game in Würzburg (Sunday 1:30 p.m.). Robert Klauss’s team toiled twice. Once on the lawn and once in the weight room. Johannes Geis and Fabian Nürnberger were first treated after yesterday’s diagnoses and then completed a one-hour running unit. Robin Hack (torn ligament) took part in the warm-up with the team and then worked individually with athletics trainer Gerald Störzenhofecker. Pascal Köpke was also on the field today and continued his rehab with individual training.

Yesterday, the kicker published its kicker team of the game day as usual. After the home win against Paderborn on Sunday, two clubbers were also there. After his precise cross on Manuel Schäffler before the 1-0 and his convincing performance over the full 90 minutes, Enrico Valentini has been appointed to the kicker team of the 27th match day. After the derby against Fürth, it is his second nomination in a row and the third this season. Our winning goal scorer from the weekend, Tom Krauss, will also be there. After Tom hit the post from a similar position shortly after half-time, he defeated Zingerle in the 75th minute with a solid shot to make it 2-1. For our number 14 it was the first goal in his professional career and now the first nomination for the kicker team of the day follows immediately. Keep it up guys!

Like every month, the FCN was looking for your moment of the month together with AVIA. The candidates for March were: Valentini’s premier goal – the Nuremberg boy scores in the derby, Shuranov’s double debut – first starting eleven, first goal, strong at the console – FCN-eSports goes playoffs and “against any form of discrimination” – reds Card against racism.

Eric Shuranov’s Derby appearance prevailed against the other competitors with 62 percent and is therefore your AVIA moment in March. Together with AVIA, the club is giving away a fuel voucher worth 20 euros and an AVIA surprise package among all participants. We will contact the winner.

Yesterday we drew attention to the topic of blood cancer on our channels. Those affected can only be helped through a stem cell donation. Unfortunately, due to the corona pandemic, large-scale typing campaigns cannot take place. That is why those affected need our support. But in addition to typing, blood donations are just as important. Around 15,000 bags of blood are needed in Germany every day to treat injured people and save their lives. You can register for the next blood donation appointment at UnserClub.de. You can easily reserve your own time slot and donate blood in accordance with common hygiene regulations. Here you can find more information.