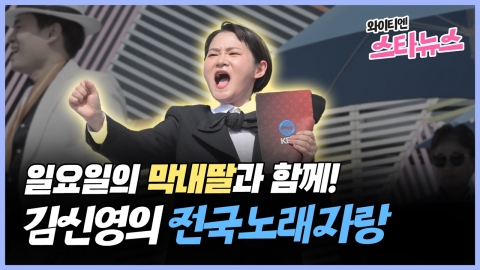 Sunday’s youngest daughter has arrived at the place where Sunday’s man, who had been in the same position for 34 years, had left. The “National Singing Contest”, which welcomed comedian Kim Shin-young as the new MC, has heralded a bold new beginning.

A press conference announcing the new start of KBS1’s “National Singing Competition” was held on the 17th at Misakyungjeong Park in Hanam-si, Gyeonggi-do. CP Kim Sang-mi and MC Shin-young Kim participated in the site.

On this day, Cho Hyun-ah, head of the entertainment center, said: “People across the country felt sorry for Song Hae’s death on June 8. Choosing a follow-up MC was heavier. than ever and it has been a task for all KBS. ” He said he had a hard time choosing a successor. He said, “I’ll bring a new wind with the new MC,” he said, citing his affinity for viewers and rich musical knowledge as the strengths of the new MC Shin-Young Kim.

After the passing of Song Hae, MC successor of the ‘National Singing Contest’, which attracted a lot of attention. After the news of Kim Shin-young’s selection, the reaction of “unexpected choice” and expectations of freshness also gathered.

CP Kim Sang-mi said about why Kim Shin-young was chosen as the new MC: “I’ve been on the radio show for 10 years. He’s very good at watching people who can and making people laugh. the right person to meet the people of the country on stage “.

There must be a symbolic person in the program, and there must have been a lot of pressure to fill his vacancy. Kim Shin-young said, “When I first got the offer, I never thought, ‘Why me?’ I was just grateful. I thought I could learn, “she said.

The first filming site held in Daegu, Kim Shin-young’s hometown, has become a major topic online. Kim Shin-young said, “The moment I yelled ‘National ~’, the tears were about to come out. I thought I shouldn’t have been crying from the start and my hair went white. It was the most tense moment of mine. life. “He continued:” After the recording ended, I watched the video and burst into tears. I cried all over the waiting room.

CP Kim Sang-mi, who saw him from the side, expressed satisfaction. CP Kim said: “It’s a broad daylight performance and it’s not an official venue, so it’s hard to focus. He radiated so much energy that I wondered what would happen if he passed out. Seeing everyone behind him focused, I thought. that I would, you don’t have to worry about it. ”

Another point to look out for is the new chemistry with the band leading the ‘National Singing Contest’. Kim Shin-young said, “I was very nervous because there was a longstanding chemistry with Mr. Song Hae. But the judges and teachers of the band greeted me with applause and loved me.” blessing to work with such friendly people, “he said.

Although the MC has changed and is blowing a new wind, Kim Shin-young’s “National Singing Contest” is expected to be built with gradual rather than radical changes. CP Kim said, “My greatest wish is to make sure no one becomes a victim of what Song Hae has done so well.” “If you wait a bit, I think ‘Kim Shin-young’s National Singing Contest’ will be shown to you again. We’ll get closer to it,” he explained.